Out of caricature comes critique. Unlike commissioned portraits, the people portrayed have no control over their portraits but instead have to face graphic attacks on their person. By means of exaggeration and accessories, specific characteristics are highlighted and ridiculed.

A CRITICAL VIEW
Since the 19th Century, there is an increasing number of amateur caricaturists. In universities, these are students in particular. Their depictions show an unofficial and sometimes subversive picture of the university “from the bottom ranks”. At the same time, professional artists discover a new genre with caricatures, which enjoys great popularity in an increasingly middle class society.

DECODE MEANING
Coded meanings can be found in the details of graphic exaggeration and satirical mocking typical for caricature portrayals. In order to understand the humour within the pictures, even the contemporaries of this era had to think outside the box. To further our understanding today, it is therefore essential to consider the original context when looking at these pictures. 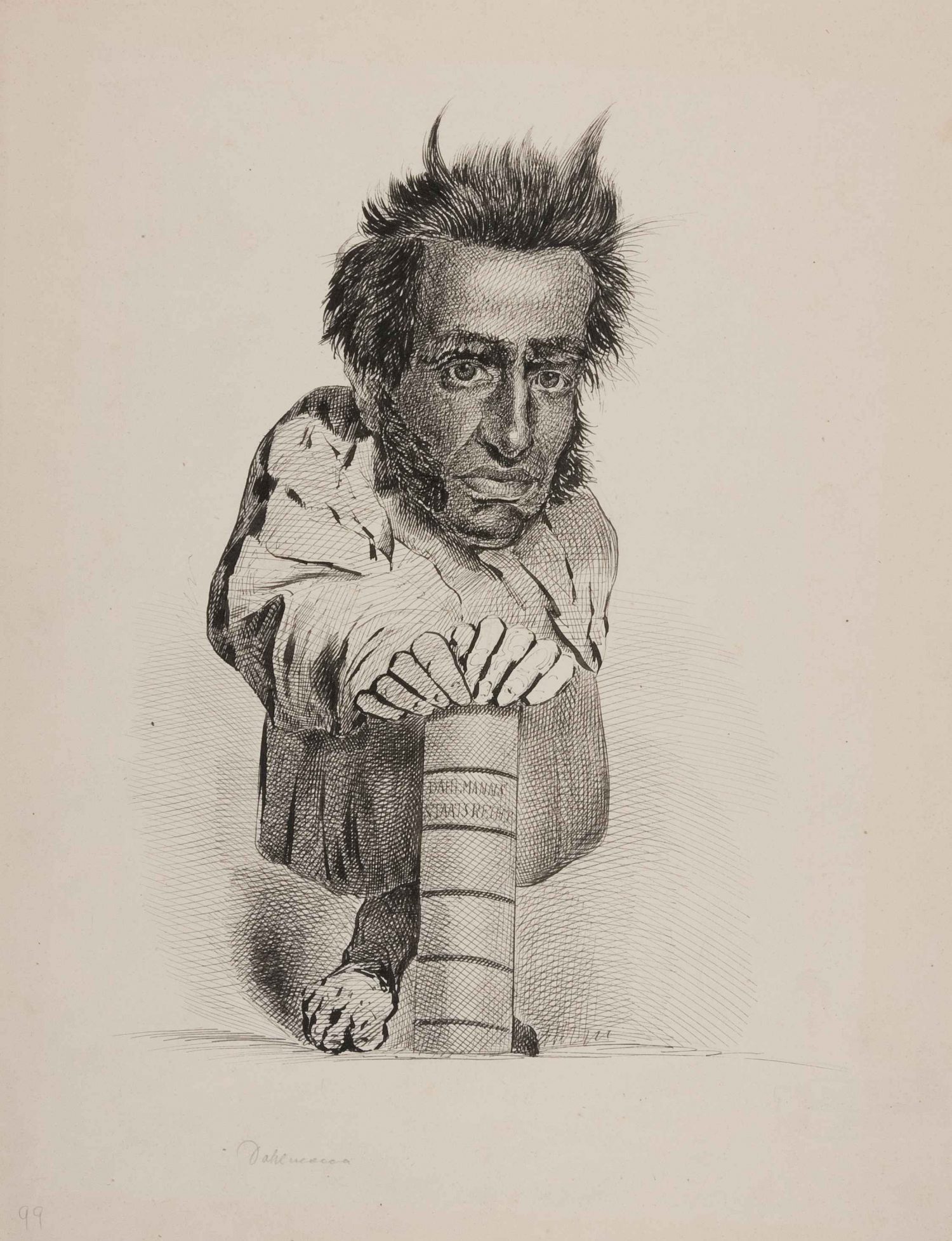 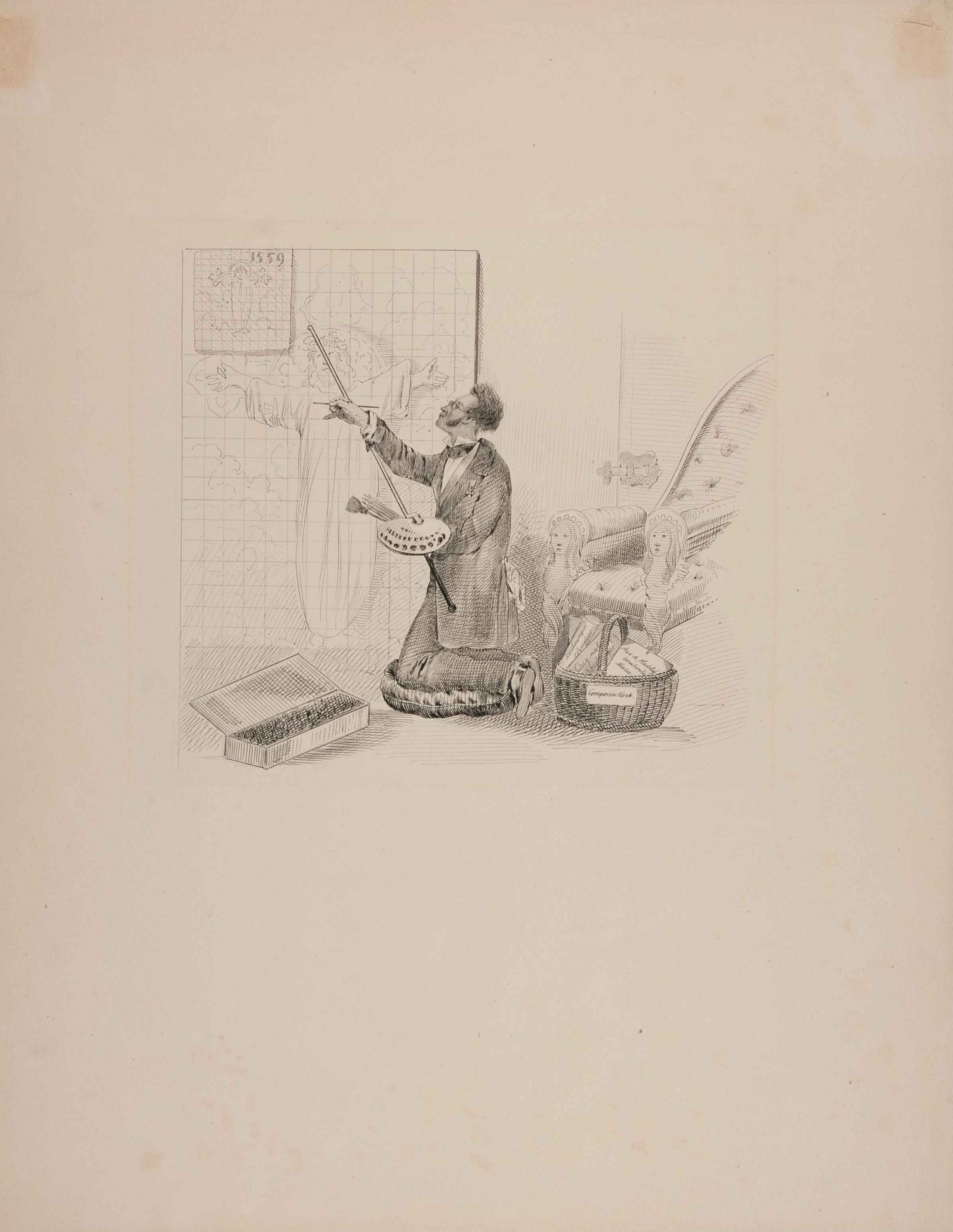 Being depicted as a copyist is a hard judgement upon Carl Oesterley (1805-1891), who had been Professor of Art History in Göttingen since 1844. Simultaneously, he held a position as court painter at the royal Royal-Hannoverian court. Trained in Rome and consorting in Nazarene circles, his style was shaped by Romanticism and religion. Kneeling, as if in prayer, he locked himself in to transfer a crucifixion of Christ from the year 1559, in the manner of old masters, onto the large canvas – one square of the grid at the time. More originals lie waiting in the “composition basket”. The criticism of religiously glorified anachronism extends to Ritmüller’s artistic style: in this case, even his drawing is painstakingly naturalistic.

In 1837, when Ernst August I of Hannover abolished the then only four-year-old constitution of the kingdom, Friedrich Dahlmann (1785-1860) authored a protest booklet along with a group of professors who became known as the “Göttinger Sieben”(The Göttingen Seven), which subsequently led to their dismissals. Having been Professor of Political Science since 1829, the historian with the distinctive sideburns was a champion for liberalism in the Vormärz period. Ritmüller shows him as a shady figure: on the one hand, he leans, Moses-like, on the pillar of constitutional law. However, the horn-like hairs of his over large head, the claw-like hands and the oversized feet make him appear like a diabolical jurist who deals with the state like an “advocatus diaboli”. 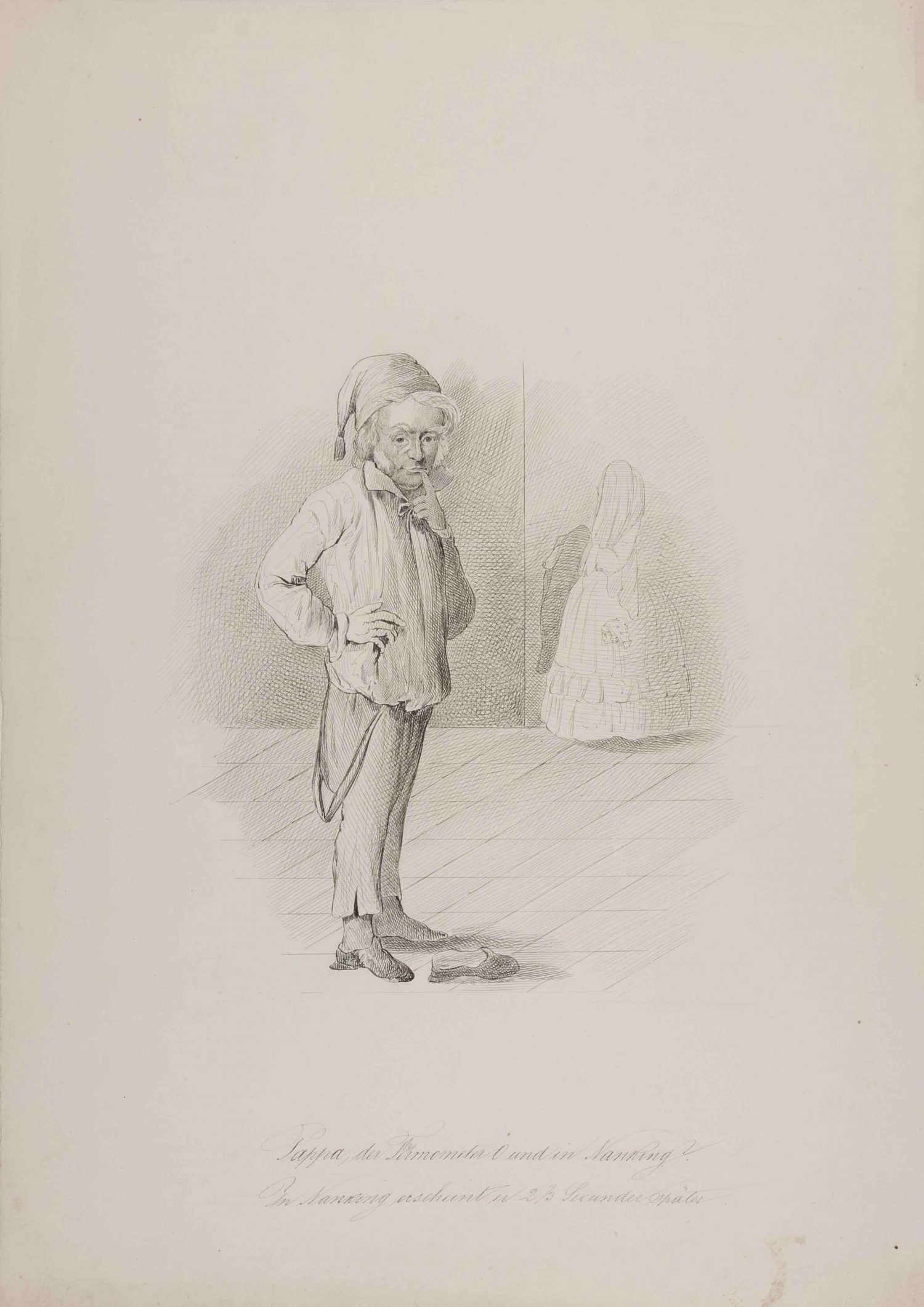 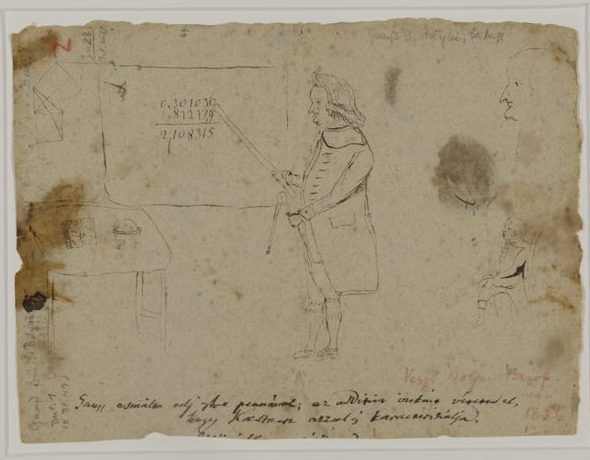 Gauss himself had the honour of becoming the subject of a caricature, one which turned him into a child. Ritmüller shows the mathematician with the head of an adult sitting on a childlike body. Dressed only in nankeen cotton cloth, he was dressed inappropriately for low temperatures, as noted by his daughter from the background. Yet, the physics genius associates a geomagnetic measuring station with the Chinese city of Nanjing and contemplates temporally measurable fluctuations in the earth’s magnetic field: “2 1/3 seconds later”. The global network of the Göttingen Magnetic Association was a hot public topic at the time the drawing was created.

KAESTNER IN THE EYES OF HIS STUDENT

The budding mathematician and physicist Carl Friedrich Gauss (1777-1855), who had already been hailed as a child prodigy during his lifetime, was also not inept at drawing. The full-figure profile portrait of his teacher Abraham Gotthelf Kästner (1719-1800), which he made with a compass and a ruler, is ambitious, even if the perspective representation of the table is unsuccessful and he needed to carry out a preliminary study for the facial line at the margin. The joke, however, lies in the simple addition on the blackboard, where the answer is simply incorrect: The teacher disqualifies himself on a content level, the student-caricaturist rises above him.

DETENTION DOODLES OF AN INMATE

With a complete lack of freedom, students were supposed to pay for their sins behind the closed doors of the detention room. This solitary detention revealed itself to be an opportunity for freedom of speech which is evident in the numerous doodles on the walls. For instance, an anonymous student made fun of the meteorologist Ernst Klinkerfues (1827-1884) but his drawing talent wasn’t sufficient for a portrait. Instead, the instruments of research depicted represent Professor “Klinkerleg”: every evening, the telescope of his daily astronomic observations turns into a wine bottle. Thus, in the detention room, the Professor is degraded from scientific authority to drunkard.

08 AMATEURS
WHO IS HILBERT
Scroll to Top